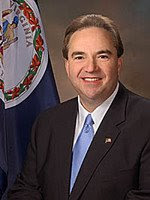 Lieutenant Governor Bill Bolling today launched a new web site -
www.billbolling.com, which will serve as his official campaign web site
during his re-election campaign this year.

"I am very pleased to announce that our new campaign web site is now live,"
Bolling said. "Our new site is a state-of-the-art platform designed to
educate Virginians on my 'New Ideas For A Better Virginia' and communicate
with voters through a myriad of email, text messaging and social networking
services."

The theme of the new BillBolling.com is "New ideas For A Better Virginia".
The site includes information on Bolling's background and accomplishments in
state government and details his proposals to find realistic and workable
solutions to the challenges currently facing Virginia, get our economy
moving again and create jobs for Virginians.

Bolling was elected Lieutenant Governor in 2005 after serving with
distinction in the State Senate for 10 years. He is running for re-election
to Virginia's second highest office this year on a unified ticket with
former Attorney General Bob McDonnell.
Posted by The Virginia Gentleman at 7:29 AM