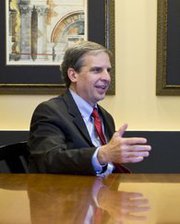 “It was almost anticlimactic: after years of efforts and weeks of scrambling to find a way to get the resolution through this year, the Senate just approved a constitutional amendment on eminent domain reform by a 35-5 vote!
The first order effect of the Kelo case was to deprive a woman in New London, Connecticut of her family home so that the local government could turn around and sell it to a developer. The City claimed that it would result in more jobs and tax dollars. (In fact, neither has occurred since the project was never built.) The second order effect, however, was to spark a wave of new property rights protections in states across the nation - a wave on which Virginia missed out.
Today, we belatedly took the first (and hardest) step toward doing something about that, when the Senate approved a constitutional amendment on eminent domain reform patroned by Delegate Johnny Joannou (D-Portsmouth). I worked closely with Delegate Joannou in working to find a way to get HJ 693 through the Senate after Joannou, in an incredible performance, maneuvered it through the Senate Committee on Privileges and Elections (P&E). The P&E Committee,which hears all proposed constitutional amendments, had always killed such proposals in the past, including my own SJ 307.
It took a lot of effort, a few late night sessions, and the support and assistance of property rights advocates across the Commonwealth, but I'm delighted to be able to declare victory today - not for myself, and not even for Johnny (though he deserves enormous credit for getting this done!), but for all property owners in Virginia. There's work left to do, the greatest remaining hurdle being that the General Assembly will have to adopt the resolution a second time next session, but this is a huge step forward, and puts us comfortably on the path of finally making "public use" mean precisely that. We've crossed the Rubicon.
And everyone wanted in on it. Narrower language died in subcommittee, and my motion to bring it to the floor died on a party line, 18-22 vote. HJ 693 reported out of committee on a narrow 8-7 vote, but once the outcome looked certain, the vote on passage was 31-8. And even that wasn't the end of it, as we then reconsidered the vote on passage and did it again. This time it was 35-5, with all but one of the seven who voted against the bill in committee supporting it on the floor.
It's true that the bill was amended on the floor, but I guarantee you that that wasn't what drove that many members to have a change of heart - not when the amended version still went at least as far as SJ 307, which Senate Democrats refused to even give a hearing in full committee!”
Posted by The Virginia Gentleman at 12:27 PM