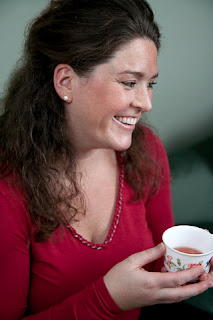 Gerarda Culipher is running for the State Senate.  Specifically, the 34th Senate district, which runs along the Chain Bridge Road corridor, from Burke through Fairfax and Vienna.

VG: What motivated you to decide to run for the State Senate?
GC: In a word, gridlock.  Simple, awful, nerve-wracking gridlock.   One morning, I was sitting on I-66 at a standstill (in the HOV lane!) with my kids fussing in the backseat, and I looked over through the passenger window and saw a fellow-commuter.  He shook his head in complete surrender. He was surrendering and it was 7:30 in the morning.  A good man, stuck in bad traffic.  I talked with my family about running for public office, and I made up my mind to champion that man, my own family, and all Northern Virginia commuters.  In Richmond, state senators not only influence how much money is collected for roads, but which projects get priority.

VG: What in your opinion are the most important issues facing Virginia?
GC: Your commute, your taxes and your family are the most important issues, and so my platform echoes them, and aims to “Cut Your Commute and Cut Your Taxes, because I am For Your Family.”  Families in my district are clamoring for relief from this traffic.  It is not healthy, and it is not efficient.  We see I66 as a parking lot more than a freeway, we try to be polite as we sit in Rt. 123 impasse, we dread Rt. 50 eastbound in the morning, and when the orange line stops underground, and a garbled message broadcasts “Thank you for your patience,” we groan.  But I will scrutinize the use of tax money for our traffic solutions. Last year’s audit of VDOT found gross misuse and underuse of tax revenues.  That audit revealed two things:  1) elected officials must be more vigilant over how your tax dollar is being spent and 2) elected officials should not be so eager to raise your taxes to pay for projects.   I will be a senator who demands more agility from state government, rather than demanding more money from you.

Northern Virginia is the economic engine of the state; the 2010 Census data released in January slams that point home.  Our growth has been magnificent and overwhelming.  Infrastructure that accommodates our community’s surge and our traffic headaches can no longer be an abstract concept.  Governor McDonnell’s Transportation Plan is a leap in the right direction.   107 of the Governor’s 900 itemized road projects in that Plan are projects for Northern Virginia.  Overseeing such improvements in our traffic-flow means seeing that construction gets done safely, on time, and on budget.
VG: What will be your top priority when you are in the State Senate?
GC: To Cut Your Commute!  Traffic affects all aspects of our lives. One voter said that the hardest part of her workday, is just getting there.  A miserable commute adds to the stress in our lives not only getting to work, but even running errands on weekends.  Sitting in traffic is unproductive for our economy.   Sitting in traffic also means lost time with our families.  We need to have representation in Richmond that is more aggressive at solving this problem.

VG: Delegate Tim Hugo has a bill, 2053, which limits out of state students, in favor of in state students.  What is your view of that Bill?
GC: Our public colleges and universities are the envy of the nation.  These schools are our literal investment in Virginia’s future.  Over and over, I hear families in Northern Virginia express their deep frustration that their qualified children were denied admittance into our premier colleges.  These top Virginia public schools have admitted increasing numbers of out of state students, at the expense of qualified Virginia residents.  I applaud Del. Hugo for bringing this debate to the forefront.  The state needs to come together to solve this problem.  I am open to any and all ideas that get more Virginia citizens into Virginia’s colleges.  The bright young people of my area should have a good shot at a seat in our excellent public universities.  We need to find a way to make that happen, and still maintain their outstanding academic reputations which make them so attractive to the rest of the nation.

VG:  Do you have a political hero?
GC: Bob McDonnell is my political hero.  In his campaign for Governor, he focused on addressing Fairfax’s real, everyday problems, he won office, and he got right to it.  Since being sworn into office, Governor McDonnell has been aggressive and relentless at following through on his promises to improve the lives of Virginians. He has shaken the status quo at its roots to wipe out the gaping budget deficit.  He took a critical eye to VDOT and exposed more than $1 billion of roads money that sat idle and useless.  Your tax money sat idle, while cars sat idle in gridlock.  That found money will now be put to work solving our traffic problems.  Governor McDonnell didn’t reach across party lines, he ignored them. That is the mark of a pragmatist. Virginians should expect legislators who put our interests first, not their own political interests.  As a candidate, Bob McDonnell spoke directly to the people with his practical plan for governing.  As Governor, he is swiftly implementing that plan.  That is my goal as I ask the residents of the 34th for their vote.   Look for me, as I doorknock in your neighborhood.

VG: If someone wishes to get involved in your campaign how can they contact you?
GC: I invite voters-- and your readers-- to share any creative and innovative ideas they have on traffic, revenue, and public education with me.  Those that wish to get involved can email Manager@CulipherForSenate.com  Know that we welcome volunteers to help us Cut Your Commute and Cut Your Taxes, because we’re For Your Family.

Posted by The Virginia Gentleman at 9:54 PM