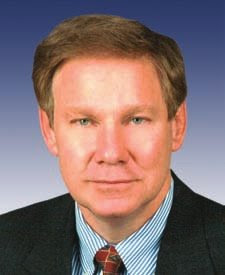 With the ouster of Jeff Frederick as Chairman of the state GOP all but certain, now may be the right time to suggest a possible replacement. Now as a conservative I am not one who would normally be a big booster of former Rep. Tom Davis, but I do think there are a number of reasons why he might be the man to lead the beleaguered state party out of the wilderness.

It seems to me that Davis would bring many attributes to the job, he is a big name, he has a great knowledge of state politics, he has a proven ability to raise money, and could help the party compete in vote rich Northern Virginia.

For two decades Davis has been one of Northern Virginia's most successful politicians. He managed to get elected and re elected in Fairfax County, a place where most Republicans have struggled. We Republicans must realize that our message must sell in suburbs like Fairfax county, perhaps Davis can help the party re focus its attention on the issues that matter most to suburban voters.

Also, after a decade of weak(and that may be a generous word)leadership, perhaps competence is what is now needed most. Davis successfully led the National Republican Congressional Committee in 2000-2002, helping to recruit good congressional candidates and raising money for the national GOP effort. Ordinarily mid term election can be brutal for the party in the White House, but under Davis leadership the GOP did well.

I doubt Tom would want the job, and certainly there would be many conservatives who would oppose him if he did, but I do think he would bring a lot to the job.
Posted by The Virginia Gentleman at 5:58 PM